Intent: walk. Result: all the things. 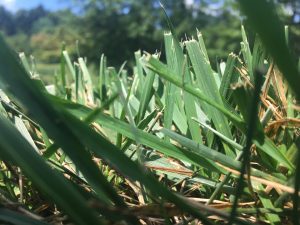 Today is a good day.

Today I took a walk. Just a walk. Simple.

No set destination. No agenda. No earbuds. No music. No heart rate monitor. No set pace. I didn’t even know what time it was when I walked out the door.

The only thing I set out with other than my silenced phone and $4 was an intent. Walk.

Intent is a game changer.

As I traveled the uneven sidewalks of my town, I feasted on my environment with my senses.

I felt my feet strike the ground, step after step. I felt the tightening of my calves and quads and glutes, still sore from yesterday’s deadlifts. I felt my nostrils pulse as I pulled today’s humid air in and exhaled it even warmer and more humid. My lungs ballooned, then deflated. My ribcage was alive. I felt my arms swinging and occasionally bumping against a leg. All the warmth and heat of the day and of my body were periodically punctuated by the chill of a sweat bead chasing the last one down my back. Interesting, the sensations. It was all something to feel.

I looked up. Out. Around. Some people still have Christmas lights and wreaths out. Wayyy late or super early? People don’t smile at others very often. I looked everyone in the eye. I smiled. I saw animals. Lots of blue cars. Flowers. Leaves. Cigarette butts. I noticed that everyone has different styles of house numbers. So individual, we are. Someone shoved a styrofoam cup behind a street sign. Interesting, the sights. It was all something to see.

I smelled so many things. Our world is really fragrant. Sometimes pleasantly. And also not. There’s an entire block on one of my downtown’s main thoroughfares that smells like dog shit. (I may have walked a little quicker that block!) Flowers have their late summer smell of last efforts. A grassy, earthy tone underwrote the vehicle smells, the food smells. Interesting, the scents. It was something to smell.

I heard crickets. Engines. Birds. The thumping cadence of my stride. I could hear a few televisions as I passed houses. Some people like it loud! People talked on their phones as I passed or they did. My breath was audible and steady. There was rap music blaring from a dark blue Chevy Avalanche. Old-school rap rules! A faint breeze whispered in my ears and kept the tree leaves awake. Interesting, the sounds. It was all something to hear.

I could taste the last of my morning tea on my tongue. The souring thickness of my saliva as my trek stretched on. A salty hint from the sweat slicking my face and lips. I swear I could taste that dog poop when I passed that one block. (I just couldn’t walk fast enough to prevent that.) Interesting, the flavors. It was all something to taste.

Allowing my environment to reveal itself to me, I had quite a walk. I can’t even tell you what my mind was doing. It was rather blank-ish. I had a thought. Then it flitted away. Another rushed in, then left just as quickly. What I felt, saw, smelled, heard, tasted, came…then went too. On to the next sensation, the next thought.

It was just a walk. Simple. But it was so much more because of its simplicity.

Intent: walk. Result: all the things. Multitasking can suck it! Make it a great day. It’s up to you.